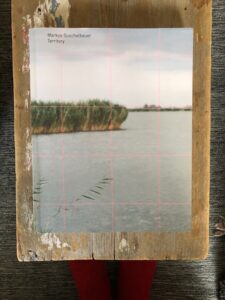 This summer I wrote an essay that was included in my friend Markus Guschelbauer’s book of photographs.  Markus is an extraordinary artist, and our friendship has been a real treasure in my life.  I have included the text I wrote here in the hope that if you read it, you might have a look at his work, follow him on Instagram, or better yet, write to him and buy a copy of his book.  I wrote about the similarity of our rural upbringings, what it means to be a queer artist from the countryside, and his photographs themselves which are deeply centered in the natural world which his photographs and installations abstract and make strange

Several years ago, I traveled to Carinthia with the artist Markus Guschelbauer, accompanying him on a visit to his family home. The trip was for my benefit—an American visiting Austria eager to get out of the city and see the countryside—and I think my friend also wanted to show me where he was from, and to have me meet his family.

The Guschelbauers own a small mountain farm near the village of Guttaring where they keep a few cows and hogs, and where they operate a Buschenschenk (For readers outside of Austria, this is a farm-based, seasonally operated inn where visitors can buy products made at the farm, eat small meals and drink the wine, cider and schnapps produced by the owners). We left Vienna, drove along the Danube and headed south and east. The distance between villages increased, the countryside became more mountainous. Globes of mistletoe hung in the bare trees, dogs barked from the yards of pretty farms. We wound our way into a valley and up the hillside to the home where Markus Guschelbauer grew up and where his parents and his brother and his family still live, farm and work.

I grew up on a small farm in rural Wisconsin. In the 1970’s and 80’s, life there seemed suspended between the 19th and the 20th century. Though our house was built in the 1960’s, our neighbors atop the bluff behind us cooked on a wood stove and had only recently retired the two big draft horses that had plowed the fields there. That same farmer taught me to trap muskrats, mink, foxes and raccoons in the marsh below our house, and I still remember him plunging his huge, gnarled hands through the crust of ice in the stream to show me how to place the muskrat traps to guarantee a clean kill. Our closest neighbor Elmer smoked speared carp and smoked it in an old refrigerator he converted into a smokehouse (he brought us a carp wrapped in greasy newspaper every Christmas), and he and his wife lived mostly on venison from the deer he shot in the forest and marsh below our house. His house had a dirt floor in front, and his wife, who was blind, was mostly confined indoors with a vicious rat terrier, also blind. In the center of their living room, Elmer had a broken television from which he had removed the innards, and when his wife could still see, she had constructed a little diorama of ice skaters complete with a frozen tinfoil pond, cotton batting snow and small cardboard skaters trapped inside a perpetual winter which, when I knew her, she could no longer see.

We did not have television, or rather, the television we owned only received one fuzzy channel, and this contributed to the deep isolation I felt as a child and adolescent; other kids living on farms were similarly disadvantaged. When home, we mostly kept to ourselves, a taciturn family lost in our own thoughts. Our life revolved around school and church, work and the many seasonal chores and tasks, looking after livestock and pets. It was a life rich with sensory details, reliable routines, the comforting repetition of natural cycles, but it was also one in which no one was too concerned about the intellectual or artistic development of a sensitive and bookish boy. Left on my own, I lost myself in books—any book I could find.

At the Guschelbauer farm, Markus and I sat in the Stube with its banquette seat at one end and the wood-fired cook stove at the other. His mother had made dumplings—a favorite food for her son—and she sat at the kitchen table knitting a stocking. An accordion polka played on the radio and she got up to ask us if we would like a bit of schnapps, then tossed a few more pieces of wood into the stove. The room was snug, homey, quiet and dull. Outside, the picturesque valley was completely domesticated, cultivated mostly as it had been done for the past century. All we could see in the landscape and in the house was comforting, predictable, strict and cold. We went to bed early in an upstairs bedroom where the heat barely reached.

There is a particular loneliness to growing up queer in a rural place. When I was a child and adolescent, there were no gay or lesbian people to be seen or known or met; alternatives to heterosexuality were alien, unspeakable. Of course there were whispers—bachelor brothers who lived alone on a farm and were rarely seen and who were the object of quiet, cruel speculation, a butch gym teacher who kept her hair short and never married, etc. The small and inward looking rural towns and villages in Europe and North America remained cut off—culturally, intellectually—well into the 1980’s and 90’s. As a queer person raised conservatively, one learns to observe, to look at your family and friends, at the town and your neighbors while knowing that you are not like them in some fundamental way. That position—part of a group, but inwardly knowing oneself to be outside of it—that stance is a unifying experience for queer artists of my and Markus Guschelbauer’s generation.

Markus’s photographs take familiar landscapes and make them strange. By bringing the framing mechanism into the photograph, by demarcating and boxing off a particular space within the landscape, his photographs de-familiarize and estrange. In one photograph taken in the American Southwest, a series of wooden dowels delineates a cube. In a short video filmed at his family home, a tractor pulls a large rectangle frame stretched with deep blue fabric across a bucolic Carinthian landscape. In another series of photographs made in rural upstate New York, chickens appear inside an abstracted landscape of green and blue boxes inside a grid. Each of these pieces creates a space within a space. The landscape, sky and colors are captured, trapped; even animals are contained within it, though they prove more difficult to govern. The viewer is both inside and outside these defined spaces which denote a kind of privacy, an interior space that is simultaneously lonely and available for all to see.

The stories of the lives of artists are full of such accounts: born in the provinces, an artist realizes his calling and comes to the city where he finds society and does his work. Brancusi is supposed to have walked from Rumania to Paris where he made some of the most radical sculpture of the 20th century based on the folk art figures and shapes from his native peasant culture in Rumania. Andy Warhol left his insular immigrant neighborhood in Pittsburgh to go to New York where he founded the Factory. Markus Guschelbauer too had to leave Carinthia to find a life in the capitol, but his work has taken up and engaged almost exclusively rural subjects. For gay people, leaving one’s home town is both a bid for liberation, but it’s also a kind of exile. Markus Guschelbauer’s work is often shadowed with a note of melancholy that underlies the more pervading note of bemused and ironical distance.

In the years I have known Markus, we have managed to see each other about twice a year for extended stays when I come to Vienna. Despite the great distance that typically separates us, my affection for him is grounded in a respect for his work, and in a common point of view, a shared experience of growing up in rural hinterlands as the queer sons of farmers. In our many conversations, we have reckoned with the feeling of being products of our provincial upbringing which we have both left behind and transcended, but which has been the subject of shared obsessions—landscapes, animals, queer sexuality, that ground his work as an installation artist and photographer, and my work as a poet and essayist.

In a recent photograph, Markus has donned a suit made of silver metallic fringe which covers the body completely and which shimmers and moves fluidly. In the image, the figure—the artist—is hidden completely in the costume and he inhabits some unloved semi-urban landscape. Standing in a vacant lot with cars and a gas station in the background, the figure resembles one of the those straw bears or folkloric demons from a rural Balkan folk festival, only this creature brings a hint of disco, of misplaced glamour to the esthetic impoverishment of its surroundings. This tinsel-clad figure is a depiction of loneliness, but it is also mischievious, funny, self-contained and private—part ghost, part angel, part team mascot. This figure’s presence indicates that anything might be possible, that transcendence is real and that even the dullest environments can be places of wonder.