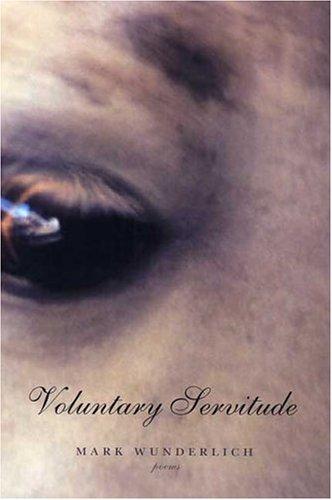 A chilling and masterful second poetry collection by Mark Wunderlich, the author of the award-winning The Anchorage

Voluntary Servitude asks of the beloved, “You say, Don’t wreck me, and I say I won’t, but how can I know that?” Here the poet is both servant and master to memory, sex, family, and the will of the lover, and the resulting poems describe the physical and psychological constraints and releases of relationships at the breaking point.

“If we seek poems that stun us out of our own miseries, Mark Wunderlich’s Voluntary Servitude is a book we should turn to. In his first collection The Anchorage, Wunderlich established himself as a champion of the homoerotic, and the certainly homoerotic servitude and domination are at the core of this second volume as well; however, this book reveals Wunderlich as a poet in command of archetypal themes that are much more widely inclusive, archetypes that slither with sensual innuendo but that struke at the core of any dream-haunted reader.”
–R. G. Evans, The Literary Review

“Vivid, convincing lines on the torments of love, flirtatious descriptions and weighty confessions mingle in Wunderlich’s deeply felt sophomore effort. “This is availability, this is tenderness,” Wunderlich’s leadoff poem announces, and the lyrical works that follow demonstrate both. Rural Wisconsin (where the poet grew up) alternates with vistas from Austria and Turkey as the poet’s erotic quest, his desperately hopeful declarations and admissions, spread out to encompass an imagined world. Insistent short lines control poems of waiting and hoping, while longer stanzas and sentences extend over a love affair’s aftermath, where “I was what they left behind in the fire.” His images end up filmic, almost baroque, finding complication and human longing in every animal, valley, forest and street. Hunting and horseback riding govern several extended metaphors, while other lines pursue (or reject) erotic experience in more literal fashion. “I spent my summer dancing on a bar,” one prose poem begins; “It was a summer of little daylight and I was mostly imaginary.” Another poem concludes on a stark invitation: “Look at me, little body./ Look at me with a heart that is drum-empty.” Wunderlich’s debut, The Anchorage, garnered a 1999 Lambda Award; the variety of forms and emotional intensities here should bring this follow-up even more recognition.”
—Publisher’s Weekly