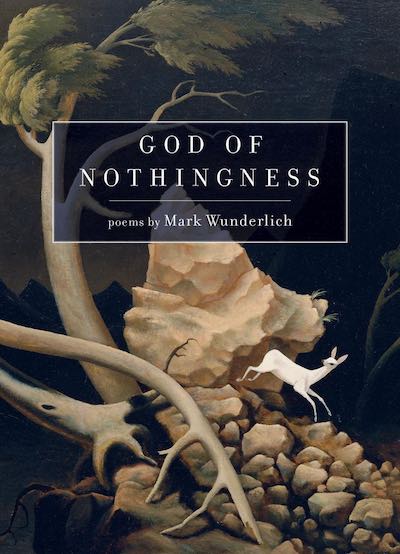 “Mark Wunderlich’s God of Nothingness positions itself ‘at the threshold of a vast emptiness. ’ Its weather rasps with a Nordic cold, and God ‘hides the world of the living / underneath his coat of snow.’  The poems speak, often, with a tonal remove, as if observing characters and landscapes and ideas from the window cut into a diorama.  We hear of ‘hired man Tiny, who died / by stepping in front of a train,’ of ‘Ha Ha Little Hunchback…whose teeth pinched so he didn’t wear them,’ of the doomed lamb, Cuthbert, and the old woman who, ‘when she cleaned a carp…kept the lucky / stone from inside its head as a bingo chip.’ I swoon over these eccentrics, but they occupy only one stratum in this book’s petrology. Erotic, folkloric, elegiac, philosophic, aesthetic, lyric, queer and rural and utterly haunted (but without the usual messiness of haunting), Wunderlich transcends downward and takes us with him, ‘Under a mantle of snow, / under moss, sand and gravel, / under roots and schist, five feet of thin soil, / under the sanded pine boards of an undersized coffin, / under lace, under linen, shift poked with eyelets,’ for death is the destination. Isn’t it always the destination in the negative capability of poems? Here where we fish in this ‘manurey slurry,’ this ‘amphibian whir,’ this haunted house where we practice our ‘spooky art / in which we staple a thing / to our best sketch of a thing,’ where we are forgettable, forgotten, and once forgotten, free. ‘This life I led was mostly private,’ he claims in the final poem, and we sense it is true, but the admission itself glints with intimacy. I am in love with God of Nothingness, which is permeated, it turns out, with a majestic somethingness.”
—Diane Seuss